The Governance of Solar Geoengineering

The Governance of Solar Geoengineering: Managing Climate Change in the Anthropocene 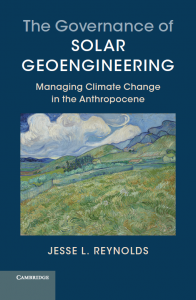 Climate change is among the world’s most important problems, and solutions based on emission cuts or adapting to new climates remain elusive. One set of proposals receiving increasing attention among scientists and policymakers is “solar geoengineering,” (also known as solar radiation modification) which would reflect a small portion of incoming sunlight to reduce climate change. Evidence indicates that this could be effective, inexpensive, and technologically feasible, but it poses environmental risks and social challenges. Governance will thus be crucial. In The Governance of Solar Geoengineering, Jesse Reynolds draws on law, political science, and economics to show how solar geoengineering is, could, and should be governed. The book considers states’ incentives and behavior, international and national law, intellectual property, compensation for possible harm, and nonstate governance. It also recommends how solar geoengineering could be responsibly researched, developed, and – if appropriate – used in ways that would improve human well-being and ensure sustainability.

This book thoughtfully lays out some governance considerations that solar geoengineering would instigate. As Reynolds suggests, we should pay attention to these issues, including the necessary norm building and international cooperation, sooner rather than later.

Some forms of solar geoengineering (also known as solar radiation modification) would require unprecedented international governance. As interest rises in these technologies, governments and non-state actors should address the governance challenge now, before events potentially overtake. Reynolds’ book is a timely contribution to a more informed global discussion.

Jesse Reynolds has written the best book-length examination of the governance of solar geoengineering to date, a work that will serve as an introduction for newcomers and provide insights for specialists. Reynolds writes with a distinct but coherent point-of-view while maintaining an openness to other perspectives. Put this on your reading list of you care about planetary-scale environmental governance.

Reynolds offers a sweeping review… Even those who most strongly disagree with Reynolds’ ultimate positions will be forced to think by his careful argumentation.

Reynolds’s book is an important and timely contribution to the literature of solar engineering law and governance… It will be of interest to academics, policymakers and experts, proponents and opponents of solar geoengineering.

The Governance of Solar Geoengineering draws together a significant body of thought that bears on SRM governance, and it provides a helpful survey of the legal background against which SRM research and development have begun to take place… [T]his is an important contribution to the literature, and as one of the first single-authored academic books on governance of solar geoengineering, it should be widely read.

His comprehensive and in-depth analysis is a valuable “toolbox” for policymakers, and it unveils multiple routes for further research for scholars.